The depths of winter are upon us, and what a winter it has been! I hope you are all coping. I’m doing okay, but did have to book a plane ticket to Halifax for a couple of weekends from now to give me something to look forward to. It doesn’t matter if it’s cold, as long as surf is involved I’ll be revived.

Here are some recent developments in the domain that you may find noteworthy. They are about child pornography reporting, why FOI in Ontario has not yet met e-discovery and why there is no “bright line” test for improper “campus speech.”

Kelly Harris of Canadian Lawyer InHouse recently wrote on Ontario’s new child pornography reporting law. Kelly quoted me, and in prepping for his call I did a bit more thinking about the law than I had at the time I first reported on it. The reporting duty applies to “persons,” and though one might argue a corporation/system owner has a duty to report, the law is clearly geared at individuals. But as I told Kelly, corporations can’t wash their hands of the duty to report material found on their computer systems. It’s good workplace policy for employers to support the members of their IT staff, but employers also need to protect themselves from potential criminal liability.

In my view, one of the things the legislation does is engage “the course of justice” as soon as a person discovers what might reasonably be child pornography. The suspected pornography, which is in the custody of the employer, is now evidence and must be treated carefully given the potential for obstruction charges. This is a significant change, and rules out dealing with the found material as an internal, employment-related matter.

As for policy-buliding, Ontario school boards have great reporting protocols that employers may look at to get started. Search “child in need of protection” and “district school board.”

Why FOI in Ontario has not yet met e-discovery

Decisions about how to conceive of a “record” are so fundamental that they tend to get information and privacy people like me excited. The January 19th Arizona Court of Appeals decision that metadata is not a “public record” under Arizona open government legislation has attracted such a buzz. Here is K&L Gates’ summary of the case, which I have scanned but not read.

Our freedom of information law in Ontario is different, and allows for access to records in electronic form (see the Gombu case for an example). That said, we have not seen an escalation of electronic production demands that even remotely resembles that demonstrated in the American e-discovery experience or even the relatively mild Canadian e-discovery experience. Paper-based production in Ontario FOI procedure still prevails, likely because the system is a user-pay system where escalation does not serve requesters and because the regulation does allow for full recovery of the “invoiced costs” of e-discovery. I’m aware of just one IPC/Ontario order upholding the recovery of such costs, but it’s an important one if escalation is to be avoided.

I ignored my friends’ tweets about “the doucebag case” for about two days until, with some time to kill in the back of a cab, I linked through one friend’s tweet and realized all the buzz was about a student speech case – one about a high school student who was sanctioned for referring to her school administrators as “douchebags” in her personal blog. The news that’s got people talking (or tweeting as they may) is a Connecticuit court’s January 15th partial dismissal of the student’s claim. Mary-Rose Papendrea has posted an excellent summary and critique of the judgement on the Citizen Media Law Project’s blog. She says:

…courts should be reluctant to apply Fraser to off-campus Internet speech because that case does not require a showing that the offensive expression disrupted or could reasonably be expected to disrupt school activities. Because Fraser does not require the school to make this showing, schools could restrict any indecent speech by a student, anywhere regardless of where he engages in it, without any additional showing. The idea that schools could regulate offensive speech on the Internet without showing any harm to the school would give school officials virtually limitless authority to police their students’ expression, and this should give courts pause. Although students have somewhat limited free speech rights while they are at school, they are entitled to full free speech protections outside of school.

To suggest that a sanction must be based on reasonably foreseeable harm to a legitimate interest is reasonable, but let’s look at the moral panic that this case has caused.

The article I linked through to on my cab ride was one about a proposal by a Connecticut legislator that was made in response to the case. In the name of clarity, this legislator has proposed a “bright line rule” – one that would “prohibit school authorities from punishing students for the content of electronic correspondence transmitted outside of school facilities or with school equipment, provided that such content is not a threat to students, personnel, or the school.”

To be fair, even the legislator’s proposed rule builds-in a harms-based test. The focus on the locus of the communication, however, is misplaced. I make no comment on the outcome in the douchebag case, but I do agree with the Court’s comment that locus of the communication has become less and less relevant to the balancing of interests that is required in resolving student speech cases. The Court said, “Off-campus speech can become on-campus speech with a click of the mouse.” This is indisputable. So rather than generate some false sense that individuals will not be accountable for harms caused or likely to be caused by communication made from a home computer and on a personal blog, policy should focus on the real issue – what standard of harm or foreseeable harm to the school environment justifies a restraint on speech in what circumstances. To suggest answering this question is as easy as looking at the locus of the communication is misleading.

***
I’ve been wordy today, but I’ve been enjoying using this space for telling personal stories. That’s what online social networking is about right?

We refer to this photo as “the men photo.” There’s a copy on our living room wall at home and I send it around to friends once and a while because it brings back such good memories of our time in Maui. 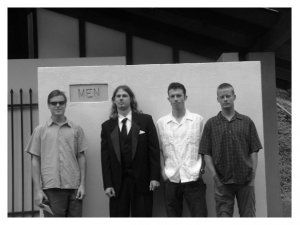 The guy in the tux is my friend Artur Szpunar, and this was his wedding day. Art went down to Maui with me for a windsurfing trip after finishing first year of an engineering degree at Queen’s University and has never left. When I packed my bags to return home, I left Art with less than $100 and a few days of paid-up rent. Now, 11 years later, he’s got a happy family and an awesome gig as sail designer for Maui Sails.

Art’s wedding was about four years after his arrival on Maui and just a month or two after he survived a crazy and serious battle with necrotizing fasciitis (Streptococcus A or the “flesh eating bacteria”). I owe Art big, because I became infected by the Strep A bacteria shortly after him, and the only thing that convinced the hospital to take my case seriously at first was my pleas about what happened to Art. Given the early attention, I ended up checked into the hospital for only a week. I frequently wheeled myself down to visit Art, who by then was on the mend.

To Art’s right is my good friend Dan Kaseler, also a sail designer, now based out of Washington state and designing windsurf and other sails through his own company. To Art’s left is Johnny Boyle, a Scottish hellman who has now settled down with family in California. The other fellow is John’s brother “Moxie.”

The wedding plan was to have guests congregate with the groom in the parking lot of the Iao Valley State Park before hiking to meet Art’s bride-to-be, Amanda. If it was sunny Amanda would be in one place and if it was rainy she would be in another. Not a bad plan if the Iao Valley wasn’t one of those places in Hawaii where it’s almost always sunny and rainy at the same time. So it took us all a few wrong turns to find Amanda, but all worked out. Art and Amanda got married, Art healed and got back in the water and they now have a beautiful three-year-old daughter.

Telling a Maui story always reminds me that there’s more than one way to go about living life. It also helps warm my heart and put a smile on my face, even in the depths of winter. Thanks for listening!

View all posts by Dan Michaluk

This site uses Akismet to reduce spam. Learn how your comment data is processed.

Posts. The views expressed here are solely the authors’ and should not be attributed to Borden Ladner Gervais LLP or its clients. The material and information provided on this website are for general information only and should not, in any respect, be relied on as legal advice or opinion. The authors make no claims, promises or guarantees about the accuracy, completeness, or adequacy of any information linked or referred to or contained herein. No person should act or refrain from acting in reliance on any information found on this website or blog, without first retaining counsel and obtaining appropriate professional advice from a lawyer duly licensed to practice law in the relevant jurisdiction. These materials do not constitute legal advice and do not create a lawyer-client relationship between you and any of the authors or BLG. The authors act only on behalf of management. They welcome management-side inquires, but interested persons should not send any information about their matters to the authors in initial communications and before they have had a chance to complete a conflict check.